Kimberly Daniels is the terrific Goodreads author of The Valkyrie Profiles which is the #1 book of the Valkyrie Trilogy.  We learn some more about her on this installment of Spotlight on Authors.

Kimberly spent four years teaching English Composition and Literature at the University of South Alabama. She also writes Science Fiction (Genre fiction! Oh, My!) and consumes copious amounts of coffee and whiskey (not necessarily together or in that order). When she’s not busy writing, much like a cat, she enjoys napping, running suddenly into a randomly selected room, and plotting the destruction of mankind. She exhibits a curious interest robots, leading to the widespread rumor that she may, in fact, be one herself.

Her current projects include the third installment of the Valkyrie Trilogy and various short stories. Her first novel, The Valkyrie Profiles, was a quarter finalist for Amazon’s Breakthrough Novel Award in 2013 and the second novel, Flight of the Valkyries debuted in May of 2014 to much fanfare (read: she threw confetti at herself). She also has a prequel short story in the Valkyrie Trilogy, Children of Ymir, that is a Kindle exclusive and another short story in the second Lunar’s Children anthology by Dark Oak Press titled Chimera, which began as horror but somehow still managed to end up as Science Fiction. Much to her own surprise, she currently lives in New Orleans, LA. eating as many raw oysters as robotically possible (that’s a lot of oysters) and working on yet another time machine.

When did you first realize you wanted to become a writer?
My first serious thoughts on being a writer began around the age of fourteen. I was really big into Star Wars and read a lot of the books that were written post-Return of the Jedi. At some point, I realized, hey, I could write books like this! So began my first book, never to be finished, handwritten across several black and white Mead compositions books. Eventually, I outgrew my Star Wars fan fiction and by the time I started on my Master’s in English, my first ‘real’ novel was well underway.

What book(s) has most influenced your writing?
I grew up on classic Science Fiction: Isaac Asimov, Robert Heinlein, Andre Norton, etc. so those books had the biggest impact on my writing. My prose tends to be tight, no pages and pages on the scenery descriptions for me. As Hemingway said, “Writing is architecture, not interior decorating.” I’ve also been partial to Victorian literature, like Jane Eyre, so I tend to incorporate a lot of gothic elements into my work as well. Some of the books I still read over and over again are Asimov’s “The Caves of Steel” and “The Stars Like Dust”, Philip K. Dick’s “Ubik”, Bronte’s “Jane Eyre”, Huxley’s “Brave New World”.

When and where do you prefer to write?
I prefer the morning, before my head has time to get bogged down with everyday, mundane tasks. The where can vary these days, though years ago I had to be in ‘my writing spot’. I do usually write away from home, but I prefer quiet places, like a dark corner in a locals-only coffee shop. We have a wonderful English Tea Room near my house that I hope to try out soon. Sometimes I like to listen to music when I write. Each of my characters has their own play list on Spotify so that helps me get my head in the right place before I begin.

What was your biggest challenge in writing your book?
With my first book, it was finding the time. I wrote half the book as my Master’s thesis, but right after graduation I took a two year internship at the University of South Alabama teaching four sections of either Composition or literature. I barely wrote at all during that time, but once I finished the internship, I could teach fewer classes and devote half my time to finishing the book.

What advice do you have for other writers?
Read good books! Never neglect your reading for writing; you should do both with equal vigor.

What do you like to do when you are not writing?
I do a lot of reading, of course, but I also have a horde of rescue pets so they keep my pretty busy too. I just moved into a house that we are renovating ourselves, so I spend much of my free time on the project that is my new home.

Can you share something that is happening in your life that would surprise us?
That’s a tough one. I don’t feel like I’ve ever done anything particularly surprising. I’m a vegetarian, so that surprises some people. I own two pit bulls, a toy poodle, and a cat who all get on swimmingly. I love whiskey and playing dress up on any given day for no reason other than my own amusement.

Do you have any unique talents besides writing?
I took ballet for fifteen years so I’m a pretty great dancer. I also taught myself how to sew a few years back so I could make my own costumes for Halloween and SF conventions.

What can we expect from you in the future?
Many, many, many more books! I’ll never stop writing. I aim to leave me mark on the world by bring people enjoyment through my fiction.

Is there an author that you would really like to meet?
All of my favorite authors are dead, so it’d be really hard to meet any of them without a time machine. Meeting Neil Gaiman would be cool though. Simon Pegg wrote a book, so I guess he counts and I’d certainly like to meet him.

What book are you currently reading?
I just finished The Paris Wife, by Paula McLain and Unwind, by Neal Shusterman. I just got into Philip K. Dick’s Man in the High Castle, and after that I plan on reading Cress, by Melissa Meyer.

Who designed your latest book cover?
Ana Cruz. She is the absolute best! She’s a pleasure to work with and her art is phenomenal. You can check out more of her work at Anna Cruz @ Deviant Art.

What is your favourite quote?
I’ve got so many, it’s hard to pick just one! I guess I’d have to go with “I write for the same reason I breathe – because if I didn’t, I would die.” – Isaac Asimov. I feel the same way. If I couldn’t write, I think I’d probably die. 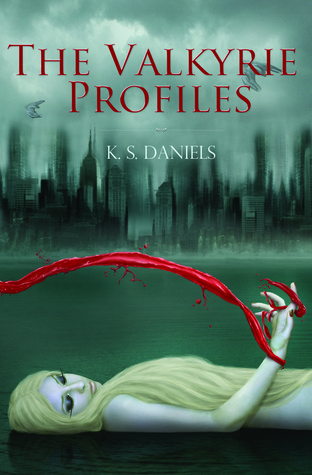 The Valkyrie Profiles: With war on the horizon and a rising body count, Vladia Robespierre must decide if her brother is really what he seems? And if he is the enemy, what does that make her?

Kimberly, Words on a Limb would like to thank you for your time.  We wish you much success with The Valkyrie Profiles and future books in this series.