Jeff Kinney is a successful cartoonist, producer and game designer in addition to being the bestselling author of the Diary of a Wimpy Kid children’s series. His collection is a global phenomenon, selling 75 million copies, translated into over 30 languages, sold in 40 countries. But, as we will discover, it was not an overnight success.

Jeff grew up in Fort Washington, Maryland with an older brother, an older sister and a younger brother. From a young age he fancied authors Judy Blume,

Beverly Cleary and J.R.R. Tolkien. Later, when he attended the University of Maryland, his creative juices began to flow. He created Igdoof, a character that became a comic strip for The Diamondback, his campus paper. After a move to New England in 1995, he began working on the Wimpy Kid idea during 1998.

His idea did not reach an audience until FunBrain posted an online version of Diary of a Wimpy Kid in 2004. It became an online success with 20M+ views in just over 3 years. The popularity of the story led to a printed version in 2007 by Amulet Books. The rest as they say, is literary history, including 11 follow-up publications and 3 feature films.

Around the time his first book was hitting the presses, he began work on designing the now wildly successful game website, Poptropica, that would provide kids with a fun yet educational outlet. The role-playing game design transports 6 – 15 year olds to a collection of fictional islands where they embark on quests that present them with challenges and thought-inducing obstacles.

Jeff went on to feature in TIME magazine’s 100 Most Influential People of 2009. All things considered, not bad for a kid from a town of just over 23,000. He presently lives in beautiful Plainville, Massachusetts with his wife, Julie and their two sons, Will and Grant.

We are happy to share with you a telling interview with the brilliant creator of the enigmatic favourite, Greg Heffley.

How old were you when you first created something you wanted to share? Was it a watershed moment for you?

I was in the fifth grade, and I had drawn a giant mural of dragons and warriors in colored inks. It was a big moment for me. I unfurled it for my class upside down as a joke, but it didn’t work. Everyone thought I just wasn’t that bright.

Your first book was written in a non-traditional style, with off-beat stories

and uncommon, quirky illustrations – not your typical children’s book. How do you feel your first book broke through publishing norms?
I feel like the world was ready for something like this… a book that delivered on kids’ expectations for highly visual work.

Many authors love the feel of holding their finished books. How do you see the proliferation of digital media changing the way you create?
I hope there’s always a place for the printed book. I think eBooks are fine, but there’s nothing like putting a printed book in the hands of the child.

Your books do so well world-wide. What do you think is the common
appeal for kids outside of the US?

I think kids see themselves in the Heffley family. Childhood is a universal condition.

You often mention that Greg’s stories reflect some of your middle
school experiences. How has the pre-teen’s world changed since

Could you tell us about the genesis of Poptropica. How do you decide which of the stories in your head make it into print, in your game designs, or put away for a future medium?
I was mowing my lawn one day when the idea for Poptropica sprang up. It’s changed a lot from its initial conception, but the basic idea is still there. We publish every story we come up with that feels like it has merit.

I understand you spend time out on the road. How much of your year involves travel? Are there fathering moments you miss? How do you adapt?
I spend about a quarter of the year traveling. There are fathering moments I miss for sure, but I coach both of my sons in soccer and basketball, and I was the cubmaster for my local Cub Scout pack. So I try my best to be there for my kids in a meaningful way.

Story-telling is a close-to-your-heart tradition in your family. How have you passed that on to your boys? Do they show an interest in creating themselves?
We talk a lot around the dinner table and try to tell funny stories. I can see that both of my boys understand the value of a good sense of humor.

of TIME’s 100 most influential people in the world?
I found out after a school visit, I believe. I was giddy, but I also didn’t believe it was true. I found out second-hand, and it was difficult to pin down the veracity of the selection. I still don’t believe it.

Knowing what you know now, what pearls of wisdom would you impart on a much younger Jeff Kinney?
I’d say to treasure childhood and do not take yourself too seriously.

I’ve read that your first drawing was of a turtle. Where is that drawing? Could you share it with your fans?
That’s true! My mother has it. I’ll have to have her take a picture of it and send it to me.

If you could spend an entire day with any one person, dead or alive, who

would it be and why?
I’ve thought about this a lot. I’d go with Bill Bryson, who I believe is a genius. But I’d be intimidated and wouldn’t have a lot of interesting things to say to him.

You list Carl Barks, Judy Blume and J.R.R. Tolkien as some of your early favourites? Who are some current authors you enjoy? Who do your kids like?
I’m going to go with Bill Bryson and Malcolm Gladwell. I’ll read anything they write. My kids like Rick Riordan and Dan Gutman.

They say success is the progressive realization of a worthwhile dream. What new goals are you creating for yourself to maintain your success?
My goal is to have a career in writing. I can’t yet tell if I’ll be able to parlay my success with Wimpy Kid into something more long-term.

You have mentioned on occasion that Greg’s story has to end someday. Have you thought of the next Greg?
I’ve changed my thinking on that. I think it’s important that Greg’s stories DON’T end. He’s a cartoon character, and the best ones live forever.

Here are a couple questions we gathered from your young fans:

Our readers would love to hear about your upcoming book, ‘The Long Haul’. What can you share with us?

The Long Haul is about Greg Heffley’s family hitting the open road. Marauding seagulls and a runaway pig will make appearances.

Jeff: I really appreciate the thoughtfulness of your questions. Thank you! 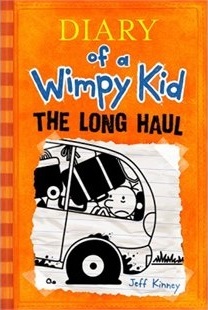 It’s a new school year, and Greg Heffley finds himself thrust into middle school, where undersized weaklings share the hallways with kids who are taller, meaner, and already shaving. The hazards of growing up before you’re ready are uniquely revealed through words and drawings as Greg records them in his diary.

In book one of this debut series, Greg is happy to have Rowley, his sidekick, along for the ride. But when Rowley’s star starts to rise, Greg tries to use his best friend’s newfound popularity to his own advantage, kicking off a chain of events that will test their friendship in hilarious fashion.

Author/illustrator Jeff Kinney recalls the growing pains of school life and introduces a new kind of hero who epitomizes the challenges of being a kid. As Greg says in his diary, “Just don’t expect me to be all ‘Dear Diary’ this and ‘Dear Diary’ that.” Luckily for us, what Greg Heffley says he won’t do and what he actually does are two very different things.

I've got a new school planner out so you can get a head start on next year 🙂 pic.twitter.com/z5rqnS3czZ

A huge thank you to my publishing teams & all my fans in Lisbon, Madrid, Valencia & Barcelona! It was a great tour! pic.twitter.com/WJOTR5P6lu

Enjoy other books by Jeff Kinney:

Words on a Limb would like to extend a warm and heartfelt thank you to Jeff Kinney and his team for the opportunity learn more about his story.

We wish you continued success, Mr. Kinney, with Greg and his future tales, particularly with The Long Haul which hits books stores on November 4, 2014.

5 thoughts on “Words on a Limb Interviews Jeff Kinney”